A picture’s worth a thousand words……

It’s no wonder Sears is in trouble.  Their personnel training and software systems need help.

The situation:  A repair person came to perform annual preventive maintenance on my Kenmore washer and dryer.  When I showed the person that I could not get the lint screen clean, he offered to send me a new one because a clogged screen slows down the drying process and uses more electricity.

He ordered a replacement screen.  Sears sent the wrong screen.   It would not fit into the slot.

I called Sears to order a replacement for the replacement and carefully explained what had happened, including that the problem was  that the screen, itself, had lint that could not be removed by the repair person or by me.

Again, Sears sent the wrong part–but a different wrong part.  In the photo below, the original part is on the top; the second replacement part, on the bottom.  As you can see, there is no “screen” on the second part. 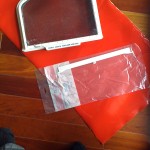 Here’s the worst part:  After getting the second wrong part, I tried cleaning the screen with a soft-scrubbing sponge–guess what?  It worked!  If the repair person had only been properly trained……

Sears’ cost:  Time for the repair person and the operators who took both the first and second orders + shipping for two parts + an unhappy customer.